March 19, 2018
Agents from all over Germany welcome you to the XM Portal Compass project. We are creating  a new portal in the context of the 2018 MAGNUS Event at Schloss Kaltenberg.  Take a tour through our project proposal by clicking through the topics above. The paticipating Agents: Person of contact: iTrack Technical contact: dergeschworene Agents: uditaren Stoerenfried feuertiger velotriraptor phlowx igor4cro DerNarf MissTerioes Moertel jne1979 JpDDR
Read more 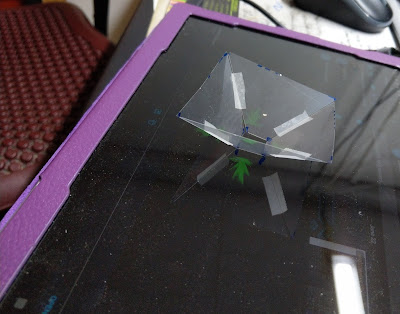 Greeting agents! If you're lucky and received a special biocard from us, then it's time to build your own hologram. Cut out the panes with scissors and glue them together with transparent tape. Play the YouTube video on your Phone and place the hologram at the center of it. That's it! You have build your own hologram.
Read more

May 26, 2018
XM Portal Compass - Chapter 3 It takes one to gather all 26 May Schloss Kaltenberg It had been silent since The Cure. With the code not letting itself decipher as well as no more portal infections were detected after The Cure we found, the BR&T virus deciphering had been stopped. Niantic started preparing their first Epiphany Night Remembrance in Europe at Schloss Kaltenberg, less than 500 km from where it happened for real. Many groups of agents had sent in their portal proposals to remember and relive the Epiphany Night but only the selected ones got assigned to one of the Archetypes. Most agents worked very hard to finish their portals in time. While working on it mysteries had to be solved to be able having their portals work with the scanners. For the 1 st time in European history, Archetypes portals were going to be connected to the worldwide XM Portal Network. In Germany, a group with members from all over Germany with 1 Belgian got selected and
Read more

May 24, 2018
Chapter 2 More than we thought March 2018, Worldwide. During a standard research NIA discovered several anomalies in the portal network. When they extracted the data of one of the infected portals they found a virus in the data. Several other portals around the world contained the same symptoms and all showed to be infected by the same virus. 2 Coders were put on the deciphering of the virus, which didn't let itself read easily. Much of the code contained non-understandable passages. But like most viruses, this one also had signature. The header contained the abbreviation BT&R, making it getting called Basic Research and Testing. After 3 days of trying to understand the virus, it was still not clear what the virus did, neither the real purpose and neither the owner. But being it an external intrusion of the network, NIA operatives decided it had to be removed as soon as possible. Several tests were run on a small internal controlled networks and its spreadi
Read more

May 22, 2018
XM Portal Compass -  Chapter 1 Hero or Criminal? 21 April 2013 CERN It was a sad day there in Zurich. When HAZDATA entered the building they found a dead body, later to be identified as the body of Victor Kureze. Geneva Police confirmed there was a death, but they later denied this. Did they know more? What happened? Stories go around he was killed by Roland Jarvis, others think it was homicide. But what really happened? It was Victor who discovered Exotic Matter, coming from different dimensions. While investigating he knew what was coming. He saw the dangers coming to earth, sent from other dimensions. And he knew there was only one solution to stop this. Knowing his chances, knowing the dangers earth was facing, knowing there was only one chance, 1 small time-frame, he did what real hero’s would do. Dare to walk into the unknown. Victor sat in his chair. Writing his last messages. Only I can do it, he said to him self. In Europe, Resistance was young
Read more 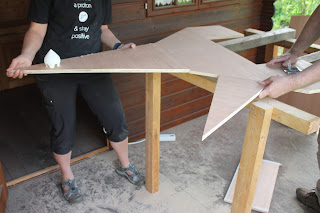 In order to participate in the Osiris Epiphany Night event at Schloss Kaltenberg with a well functioning portal matching the description of our application, we all met to build on it for a whole weekend. This is not quite easy for our team as the team contains mostly RES GER agents which means - we come from all different corners of Germany, and 1 from Belgium. The arrival was informal. Throughout Friday almost everyone arrived. But first things first - the grill was assembled. No decent food, no work. Then we went shopping. Wood was pre-ordered, we just had to pick up everything. After filling up our car with building materials, we went on getting drinks and the like. Back to our construction zone. Two more agents were already waiting, ready to start.   This day was more or less dedicated to planning. And to prep work like sorting out the zillions of LEDs and starting to connect them. And program them. And to grilling, of course. No food no fun. Saturday the first powe
Read more
More posts